Want to get all the latest updates on refugee rights, directly from IRAP headquarters? Then subscribe to our newsletter! You will receive IRAP related news, updates from our law school chapters, client success stories, relevant media links, and opportunities to get involved.

Wondering what you are signing up for? Check out our newsletter archive: 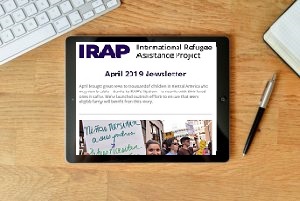 January 2021 – A Look Back on January: Hope For Refugees

November 2020 – A Look Back on November: Expanding Our Reach

October 2020 – A Look Back on October: Fighting For Families

September 2020 – IRAP in September: Kicking Off a Critical Fall Season

July 2020 – IRAP in July: Standing Up For Asylum Seekers

November 2019 – IRAP in November: Back to Court

October 2019 – IRAP in October: Looking Back and Forging Ahead

September 2019 – IRAP in September: Victory for our Afghan and Iraqi Allies

May 2019 – IRAP in May: Celebrating a Decade of Legal Advocacy

April 2019 – IRAP in April: A Huge Win For Children in Central America

January 2019 – IRAP in December & January: Branching out for Justice

October 2018 – IRAP in October: Standing in Solidarity and Defying Hatred

September 2018 – IRAP in September: Fighting the Refugee Ban in All Its Forms

May 2018 – IRAP Expands the Fight for Refugees

October 2017 – Refugee Resettlement Under Threat: How IRAP is Fighting Back

March 2017 – A Movement is Born: IRAP Responds to the Travel Ban

June 2016 – Only a Global Community Can Face Global Challenges. Join Us!

March 2016 – People of Value: Bipartisan Reform, Justice from the Courts, and More!

November 2015 – The New and the Old: Report to Supporters, National Student Summit, Alumni Association, and More!